The Hereditary Neuropathy Foundation (HNF) is thrilled to announce the completion of the film, “Bernadette.”  The documentary, depicting the true-life experience of now 33 year old Bernadette Scarduzio, had its first screening on May 24th at the Bryn Mawr Film Institute in Pennsylvania.   The film offers the world a view into the challenges and difficulties of living with Charcot-Marie-Tooth disease (CMT).  Filmed over four years,  audiences are invited to join Bernadette’s journey and her transformation from  patient to advocate.  Bernadette and filmmaker Josh Taub intend to make CMT “a household word,” elevating the cause to a national and international level, hopefully paving the way for more research funding and ultimately a cure.

“Bernadette” was produced by Josh Taub of Run Amuck Productions and is now being submitted to film festivals.  Stay tuned to hear the latest news about the film and future showings. 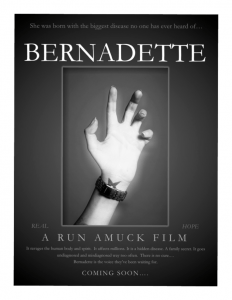