Shortly after the Summit, we received a letter from Cheryl Sherman, who attended our Movement Is Medicine™ Summit. Cheryl has CMT 1B and was diagnosed 23 years ago when she was 20 years old. She lives in Sacramento, CA with her husband and 2 cats. Here is her feedback:

I had the absolute honor and pleasure of attending HNF’s Movement is Medicine™ Summit on November 8-9, 2019. This was the first time I attended a conference on CMT where I felt inspired and energized with the breakout sessions I attended. I also felt totally connected with the individuals I met who either have CMT or are supporting a loved one who has CMT.

I absolutely loved where the summit was being held: Ability 360 in Phoenix, AZ. This state-of-the-art workout facility was designed for people with disabilities! Everywhere I went was accessible! Even the rooftop deck was accessible, which is where we had a cocktail party on our first night. The facility includes a lap pool, warm water therapy pool, hot tub, and accessible locker rooms. It had a large sports court for a variety of activities including wheelchair rugby, adaptive basketball, adaptive dance classes, etc. There is also an upstairs area with workout equipment and free weights for cardio and strength training. Plus, rooms for other types of classes like yoga. And to top it all off, they had a rock climbing wall that was adaptive!

I loved the way the summit was put together. There were breakout sessions each hour where you could participate in many different topics on improving your health and well being. There were yummy meals provided (which I so appreciated since I was ravenous after the intense workout in the morning) and then more breakout sessions in the afternoon. There were also vendors you could talk to, such as AFO companies like Ortho Rehab Designs, which makes the Helios braces, as well as Fior & Gentz and Ottobock and the fabulous Lainie Ishbia from Trend-Able, selling cute shirts. I thoroughly enjoyed socializing with other people who have CMT or who have loved ones who have CMT 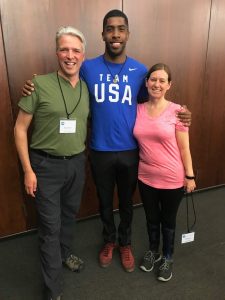 My husband and I attended on the first day Aqua Yoga, Core Tabata, The ABC’s of AFO’s, Nutrition for the Nervous System, and Aqua PT taught by Bernadette Scarduzio. We also really enjoyed hearing Jamal Hill speak to us about his story and journey to compete in the 2020 Paralympics!! On the second day, I participated in a series of exercises where researchers were collecting data on Balance and Gait exercises from people who have CMT. Then we attended breakout sessions for the intro class for Made for Motus by Christopher Dito, had a one-on-one demonstration of how to use the Kayezen Vector system, Crowd-Design Workshop for Clinical Trials, Yoga for All, and Adaptive Dance.

I felt the breakout sessions I attended were informative, fun, and inspiring. I enjoyed learning how to do tree pose in the water (which I can not do on land) during the Aqua Yoga class. I had a lot of fun doing Core Tabata, which is circuit training with 7 stations including abs, planks, and a couple of different arm exercises with weights and balance exercises. I have done most of these exercises to some degree or another, but it was fun to put them all together in a circuit, where you did one station for 20 seconds with a 10-second break and then did that for 4 sets before moving onto the next station. 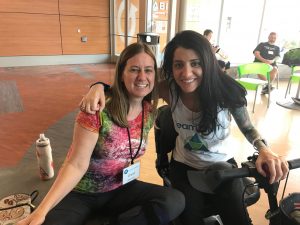 The Aqua PT with Bernadette Scarduzio was a lot of fun. First of all, I thoroughly enjoyed getting to meet my hero, and then it was also great getting to learn different ways of working out in the pool, including moving the dumbbells around at a faster speed than I am used to, which really gets the heart rate up and gives a nice burn as well.

I really enjoyed the Yoga for All, where there were 4 instructors in the room helping people as needed. There were plenty of supplies available like bolsters and yoga blocks. But I really enjoyed having the instructors help me out when I couldn’t do some of the exercises, such as rotating my feet around. It was very sweet and helpful to have one of the instructors come over to help rotate my feet for me, and then he also helped me keep my balance when I was trying to do the warrior pose.

But I have to say my favorite breakout session was the Adaptive Dance class (i.e. a Zumba class). It was lead by Justin, an amazing instructor who works at Ability 360. Justin brought an attitude of fun, playfulness and high energy to his class. He had these gold pom pom’s that he used to gesture while calling out dance moves. His high energy, fun and playful attitude, and his encouraging spirit, plus those awesome gold pom pom’s, gave me the space to dance freely. I have loved dancing ever since I was a little girl. However after my CMT started to affect my ability to dance fluidly, I became more self conscious when dancing. I am not as coordinated as I used to be and my body moves slower than my mind knows how the dance moves should go. But I have to say that I felt truly free and self expressed dancing with this amazing group of people. It made such a difference to me to be with people who also had limitations but were still shaking it on the dance floor. And, of course, having an instructor like Justin who made it so inviting made the world of difference too. It really felt so good to have the space of no judgment while dancing.

My experience the entire two days reinforced that there was the space of no judgment in all of the breakout sessions I attended!! It is really important to have a safe space to try out new exercises without judgment. The Movement is Medicine™ Summit 100% accomplished that in my mind.

To me, the best part of the two days was meeting so many incredible people, including people who are my heroes in the CMT Community. It was great to be with so many like-minded individuals who are positive and taking on their health and well being to the best of their ability based on the limitations we all face. I loved meeting every single person, and can not wait for next year!! It is the first time where I can say I have found my tribe!! 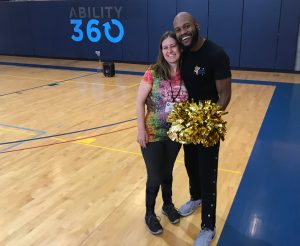 I do wish I could have attended all of the other breakout sessions as well. There were so many interesting workout sessions to attend. The input I got from other participants on these other classes showed me that everyone had a really good time in whatever session they were in. There was just not enough time to attend every single topic available. And there were some breakout sessions where at the time I did not have an interest in and now I do. For instance, I had seen on the schedule that you could do rock climbing. That wasn’t even in my realm of possibility due to my limiting thoughts around being able to actually rock climb. But after seeing pictures of people that I met at the conference that took on rock climbing, I can now see that even I could participate in that! So, next year I look forward to trying adaptive rock climbing!