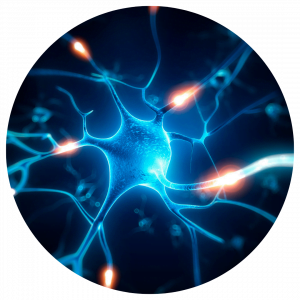 Researchers in Japan recently published the results of a study that measured how much motor nerve recruitment has diminished over time and relative to unaffected, healthy neurons.

In this study, nineteen people with CMT1A were tested with high-density surface-electromyography (surface-EMG) equipment. The surface-EMG was applied to the test subjects’ thighs during isometric knee extensions. (In this exercise, the foreleg is raised and elevated parallel to the floor in a sitting position.) The test focused only on the largest and strongest part of the quadriceps muscle, which extends the knee to move the lower leg.

The firing rate of individual motor units in the test subjects’ legs was tested twice with the second test, following a year after the first. They also did the same series of tests with a control group of people who do not have CMT1A. The resulting data showed that CMT1A patients had lower instantaneous firing rates (IFRs) than those in the control group. Their motor units’ firing rate decreased over time without any outwardly visible changes.

Since there was a clear and consistent drop in IFR for the CMT patients after a year, surface-EMG could be a tool for assessing the progression of CMT 1A.

By comparing the average firing rate for the CMT 1A and non-CMT 1A groups, it was also possible to see how much CMT1A has degraded someone’s motor nerves and muscles relative to a healthy baseline.

Getting Under the Hood: Your Muscles’ “Motor Pool”

The motor unit is the essential contractile structure in the muscles: a motor neuron located in the spinal cord, its axon, and innervating muscle fibers. Even though CMT1A is primarily a demyelinating hereditary neuropathy,  axonal damage occurs along with demyelination.

A single motor unit’s firing rate is proportionate to the amount of contractile force required by that unit. Groups of MUs called a “motor pool” fire together to activate the muscle with the most vigorous possible contraction. With CMT 1A impairing the firing rate, the muscle contraction will be weaker even if a large motor pool is recruited.

The specific neuromuscular impact of CMT1A, according to this study, involves all levels of force generation. In this study, there was no decrease in maximum voluntary contraction (MVC), a standard for measuring muscle strength in people with neuromuscular diseases relative to normal rates.

Notably, an earlier study in  CMT1A patients using surface-EMG showed lower motor cortex activity in the brain when test subjects were planning their leg lifts. This study concluded that the brain is very tied to fatigue in CMT1A, with higher-than-normal activity in the prefrontal cortex, which may be compensating for the low motor cortex activation reported in this study for the patients with CMT 1A. Awareness of the strain and conscious effort to operate muscles could be a cause and effect of fatigue.

Anyone with CMT knows it’s tiring to consciously struggle through pain and fatigue to make their arm or leg muscles move. Still, these studies provide measures and tools for assessing the severity and progression of the disease.