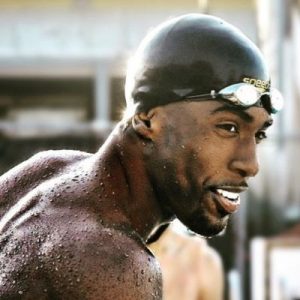 At a young age, Jamal Hill found his love for swimming through a local YMCA “Mommy & Me” swim class. The Los Angeles native was a natural born swimmer, and has continued his aquatics career throughout his life.

In elementary school, Hill began to swim competitively until he suffered a shoulder injury in 5th grade. Once his shoulder healed, Jamal began training with Conrad Cooper, a local community swim instructor who encouraged his talent. At 10 years old, Jamal was diagnosed with Charcot-Marie-Tooth after falling victim to a bout with paralysis. After Hill’s recovery, his parents encouraged him to never be discouraged by his impairment, and instead to use it as an opportunity to overcome challenges and inspire others.

Hill attended Junipero Serra Catholic High School in Gardena, California. During his high school career, he swam on the varsity swim team while being an honors student. He developed an interest in medicine which influenced his decision to major in Physics and minor in French at a college in Ohio. After three years of enhancing his craft, Hill left Ohio for the University of Southern California (USC) under the tutelage of Coach Dave Salo, to continue working out with the elite Trojan swim team, which he did through May 2017.

The discipline and determination of Hill helped him maximize the opportunity Coach Salo offered him. He used the training ground to challenge himself, enhance his skills, self-reflect, and network with other swimmers. While attending a UCLA swim meet, Hill noticed one person consistently swam better than him; that person was Luke Pechmann. The two swimmers became fast friends and, Pechmann introduced Hill to his coach, Wilma Wong, who subsequently agreed to take him under her wing. Under the coaching of Wong, Hill has concentrated tremendously on his technique while improving his ranking over a one-year period form unranked-amateur, to Ranked #1 in the Entire Nation.

Since 2014, Hill has worked as a lifeguard for the County of Los Angeles. He recently began an initiative to teach one million people to swim through private lessons, ad partnerships with swim schools worldwide, in an attempt to lower the global drowning rate. This fall, he will test for certification as a Los Angeles County Fire Department Ocean Lifeguard. The certification also carries a credential as a licensed paramedic.