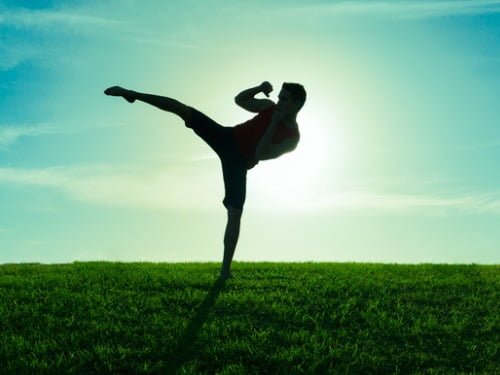 “I believe there is a purpose behind everything that occurs,” says Andrew Goldstein, 47, “and you choose how you respond. You choose to live life or be overcome by it. ” Goldstein, married and the father of two sons, lives his philosophy everyday as he copes with the effects of Charcot-Marie-Tooth (CMT) Disease.

Born in New York and raised in Nevada, Goldstein describes himself as a super athlete. As a teen he wrestled, played soccer, hockey, football and basketball. Toward the end of high school Goldstein realized symptoms that had been cropping up since he was 13 were not going away. They were getting worse. His calf muscles were deteriorating which slowed him down. He couldn’t jump high anymore.  Also, if someone brushed up against him, he would lose his balance and fall.  One by one he gave up competitive sports, except for hockey.

“Thanks to the sturdy ankle support of skates, I was always able to play hockey.” Back in New York for college, Goldstein worked out by lifting weights and swimming. In time he learned to live with constant nerve pain and back issues. “I knew my [physical] limitations and never complained,” he says of his drop foot and high arches. “There were changes in the way I walked. You know, the other guys would kid around with me,” and here he mimics them affectionately. “’Hey, why are you walking funny like that?’ And I would say I’m not walking funny, and we would crack up. That was just how it was at school.”

Goldstein recalled that his grandfather on his father’s side supposedly had polio, leaving his fingers cramped and causing difficulty chewing and swallowing. On his mother’s side, Goldstein shared a similar body type with his great grandmother. He describes it as “a big bubble tush and tiny legs. I can’t say with a hundred percent certainty that she had CMT, but,” he guesses, “she probably did.” Some on his mother’s side are pigeon toed and one cousin has scoliosis. No one in the family had been diagnosed with CMT. While his parents were deeply concerned about the deterioration in his legs, there wasn’t much discussion within the family. He shrugs it off saying, “by then I was in my 20’s, out of college and really on my own.”

Goldstein’s positive attitude has influenced his love life as well. In 1985, when he first noticed a busgirl at the restaurant where he was a valet, Goldstein turned to his brother, who also worked there, and asked, “Who is that girl? I’m going to marry her.” Her name was Angela, and this July they will be married 20 years.

When Goldstein returned to Nevada, he intended to become a teacher and football coach at his old high school. Having worked in restaurants since he was 12, he found part-time work at Outback Steakhouse. Within two years he was offered an opportunity to become a partner. About the same time his neurologist said, “You’ve been pursuing a diagnosis all this time. I don’t understand what it could be,” and he named a few obscure neurological diseases. Through a patient advocacy group Goldstein was able to secure funding to test for CMT. The diagnosis didn’t bring the relief he sought. “What good was a diagnosis without treatment?” he asked. “The diagnosis didn’t mean a thing other than to give it a name. It was the absolute worst feeling to not have any information. I wanted to know what do we do, and the doctors said we don’t know anything.” Goldstein obtained a set of orthotics. “I walked like Frankenstein.” Even now, his dislike of them is evident. “Those plastic Frankenstein things made me feel handicapped.” He refused to wear them to work.

Restaurant work involves long hours mostly spent standing. Goldstein recalls people being surprised that he was able to stand hour after hour with increasing weakness in his legs. The long hours and constant pressure started to affect his health. He had back surgery and was on pain and anti-seizure medication. He had difficulty sleeping and suffered from a phantom limb-type pain on his left side.

Thanks to his health insurance, Goldstein was able to switch to Helios braces, which were more comfortable and gave him better support.  Helios braces are custom-made, energy loading, graphite composite braces and offer users the potential for less fatigue and improved walking.

About eight years ago, a few things happened that greatly influenced Goldstein. There was a work event in the wine country region of Napa Valley in California. The company’s new CEO announced that the group was going for a ride in a hot air balloon. Goldstein tells the story while laughing, but it is obvious he doesn’t consider heights of this kind entertaining. After much coaxing, Goldstein reluctantly climbed into the basket. At that point, the new CEO stepped back and told the group to “have a good time.” Someone asked “What? You’re not coming along?” and the CEO replied, “No, you can’t get me to do that.” Goldstein remembers thinking, “If he isn’t willing to do this with us, what else is he not willing to do?”

A few months later while listening to a sermon, Goldstein heard the Pastor ask, “What is it you would want to do one day? There is no promise of tomorrow. When is your one day?” Goldstein remembered thinking, “The greatest job I ever had was at the East Norwich luncheonette in NY. When I was a kid I would say, ‘One day, we should do this.’” He borrowed money and one month later was offered the opportunity he didn’t even know he was waiting for. Ten months later Goldstein opened the Original Sunrise Café in the Henderson section of Las Vegas. Open 7am to 3pm, Goldstein only serves food that can be cooked on a flattop grill. That means no fried food.

Being able to close the restaurant at 3pm has worked out well. “Our family life has improved.  I can spend time with my sons, Zack 15 and Jake, 12.” One way he spends time with his sons is by participating in Mixed Martial Arts (MMA), which he credits with his ability to be active. “Mixed Martial Arts has changed my life.” In the two and a half years since he began, Goldstein has been able to stop the medications he needed for nerve and back pain.

He says his MMA training is adapted to his disability. Lying on his back on the ground for most of the session eliminates the need to balance and the fear of falling. Being able to exercise without standing actually helps with balance when he does stand. Goldstein strongly recommends MMA, especially to anyone living with CMT. “Training in MMA will make a difference in other people’s lives. Just lying on your back through the workout is the greatest exercise.”