Five-year-old Aiden Kelly was diagnosed with Charcot-Marie-Tooth Disease (CMT) last April, but for the Wellesley boy, the impact of this rare disease has only revealed itself gradually.

“He found out last year, and I don’t think it’s really set in yet,” said Beau Kelly, Aiden’s father. “But he’s starting to find, now that a lot of his friends play hockey, he’s not really a strong skater. So he’s starting to find that he’s a little different, and maybe he can’t keep up with kids at daycare and school.”

CMT, a neurological disorder, gives Aiden an extra gene that blocks signals from his brain to the nerves in his legs and feet. “Sometimes he stands beside you, and he just sort of falls down,” said Kelly. “At first you’re like, ‘You’re so clumsy, what are you doing, get up!’ But after a while we’re like, ‘That’s not right.’” 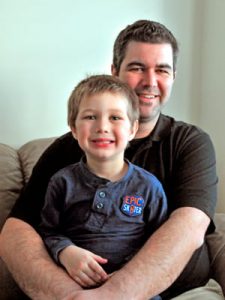 There is no cure for this disease that strikes an estimated one in 2,500, nor is there a foundation in Canada devoted to it. To fight back, Beau Kelly had to look south: on May 5, he will participate in Bike New York, a 42-mile charity ride for the Hereditary Neuropathy Foundation. Fundraising target: $9,000.

For Kelly’s family, the biggest goal is to call attention to a disease that is little known outside of medical circles. “For us, it’s trying to raise awareness,” said Jennifer Kelly, Aiden’s mother. “I feel like, we were told this, and now we have nowhere else to go, except the U.S. I know there are other families out there in Canada – I’m sure.”

The one-day ride will take Kelly through Manhattan and its surrounding boroughs, and he plans to bring his son along. “We’re not quite sure how we’re going to do it, but I have a racing road bike, and we have an attachment for his bike, so maybe closer to the end of the ride, I might but the attachment on so he’ll cross the finish line with me.”

Aiden’s diagnosis is unusual, because most cases of CMT are not detected until the victim’s teenage years or early adulthood. At the moment, Aiden is considered a mild case – he has trouble on stairs, and often loses his balance, but if the disease progresses, he may need to wear leg braces, or use a wheelchair. In addition to fighting for a cure, the Kellys hope that their charity work could help bring them into contact with CMT sufferers in Canada.

“It’s nerve-wracking for us, because: is he going to be that percentage that ends up in a wheelchair?” said Jennifer Kelly. “It would be really nice for him to be able to meet with other kids who also have the disease so he has somebody to relate to, because right now, he’s really on his own.”

She added, “All the physiotherapists we’ve gone to have never treated a child with CMT, so I feel like he’s a bit of a guinea pig.”

For the time being, the Kellys are working to make sure Aiden grows up without stigma.

“The main thing is to keep the muscle in the leg, so he goes to physiotherapy,” said Beau Kelly. “He goes to karate – we’re going to push it to two or three days a week. He really loves fishing. He just started snowboarding recently. He has a four-wheeler he rides … we try to keep him active.”

And how does young Aiden feel about his father’s trip to New York? “It makes me feel glad,” he said. “Because if they find a cure, I can be normal. And I wish I could be normal, because my friends always beat me (at sports).”

He does, however, show a positive attitude. “Nobody in my daycare and school has CMT disease. I think it’s pretty special.”

Donations for Beau Kelly’s Bike New York fund can be made at http://hnf.donorpages.com/BikeNewYork2013/beaukelly2012/