On Tuesday, September 17th 2013, the world changed for the better – just a little bit. It was the day that Bernadette, the first full-length documentary on Charcot Marie Tooth disease, was released. Not only that, but it kicked of with a very special premiere at the ArcLight Cinemas Theatre in Hollywood. With roughly 200 people in attendance (including CMT sufferers from all over the country) and a post screening Q&A session, it proved to be a magical night – ushering in a new burst of hope. Awareness for this disease is key in the ongoing search for a cure and Bernadette is certainly a big step forward in this fight. 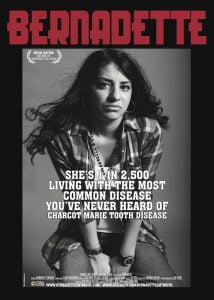 Bernadette captures the life of Bernadette Scarduzio and her challenges and triumphs living with Charcot Marie Tooth (CMT) syndrome. CMT is the number one hereditary neuropathy in the world, affecting 1 in 2,500 people or nearly 2.6 million worldwide. It is a degenerative nerve and muscle disorder, which leads the body to deteriorate over time. Filmed over four years, Bernadette documents the physical decline of a young woman in her prime who goes from engaging in sports to depending on a scooter and assistance with the daily necessities of life.

After the viewing, director Josh Taub, Bernadette Scarduzio, HNF founder Allison Moore, and Dr. Glenn Pfeffer of Cedars-Sinai joined together on a panel to address the audience’s questions about CMT and the film itself. To wrap up the evening, all attendees got to mingle with Bernadette and company for a few cocktails in the nearby lounge. Note: Surprise of the evening? Auti Angel and Angela Rockwood of Sundance Channel’s Push Girls fame, came out in support of the project.

Sponsored by The Hereditary Neuropathy Foundation, Bernadette was produced by Run Amuck Productions, LLC. The film has been officially released by Cinema Libre Studio and can be found on Hulu, Amazon, and Amazon Instant. For more info: www.bernadetteCMTmovie.com .