The Power of Sharing our CMT Story

Her big, warm smile and generous heart can melt metal. She used to dance. 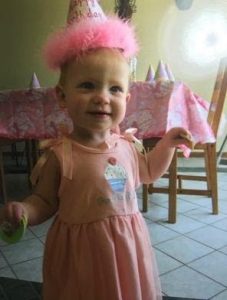 According to the Hereditary Neuropathy Foundation, CMT4 is a rare subtype of CMT (Charcot-Marie-Tooth disease), a genetic, neurological disorder that causes damage to the peripheral nerves — tracts of nerve cell fibers that connect the brain and spinal cord to muscles and sensory organs. It is extremely debilitating causing muscles to atrophy with severe weakness resulting in feet, legs, hands and arm deformities, sensory loss and impaired function.

“Alana was about 3 or 4 when we started to notice she walked differently,” recalls her dad, Luke. “She would trip, fall, and couldn’t keep up with her peers. The doctors weren’t sure what was going on. Over the course of the next five, six years she was slowly deteriorating. Her actual diagnosis wasn’t until 2017.”

CMT4A. The “A” refers to one specific gene Alana inherited from both parents: GDAP1.

“We both had that specific recessive mutated gene,” says Luke of he and Robin, Alana’s parents. “There are many forms of CMT but this is basically like a one-in-a-million form. We’re both healthy with very few genetic issues in either family. Robin and I went through gene testing so they could figure out if we both had the recessive mutated gene that caused the disease, and that’s what it was. It was a big surprise to get that diagnosis. I couldn’t believe it!”

“This gene was only discovered about ten years ago,” says Allison Moore, founder and CEO of the Hereditary Neuropathy Foundation (HNF). 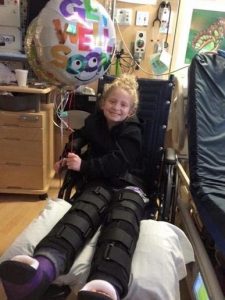 “After we finally got the genetic diagnosis of CMT4A, we were told that it would be many, many years before anyone looks into her type because it’s so rare,” says Robin. “She’s had four different surgeries now. She had that big surgery where they straightened out her legs and reconstructed her flat feet, and now the latest one she had was the guided growth surgery where they actually went in and compressed the growth plates of her ankles and her knees to help straighten out her legs because of loss of muscle. The nerves don’t clearly communicate with the muscles so there is muscle wasting. I mean she walks relatively well, but she has a hard time running. Definitely her braces help her. Her hands are just now starting to become affected. They told us that research would likely focus on more common types of CMT and we should just try to keep her active and keep her going because there really is no treatment. A lot of people end up completely losing function of their arms and legs and become wheelchair dependent.”

“It’s a hard disease to have,” says Alana. “Sometimes I feel embarrassed in front of my classmates. It’s not easy to keep up. The hardest part is the bullying. It makes me feel really sad that I’m not, like, normal and I feel like I shouldn’t have CMT4A. Why me? I just try and stay strong.”

“A lot of society is based on looks, the way you walk, the way you talk, who your friends are, what sports you play,” says a resigned Luke. “A lot of her friends growing up were playing different sports but they didn’t take her along. Seeing her struggle with that, not being able to, I guess, fit in to some of those crowds or people, and then struggling with constant teasing and being made fun of at school…” Luke takes a deep, slow breath. “That’s the saddest part.” 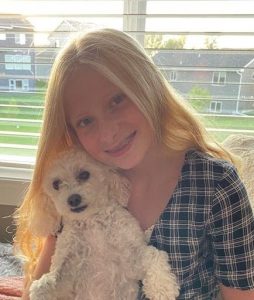 “We joined a bunch of Facebook support groups including the Hereditary Neuropathy  Foundation,” recalls Robin. “A couple of months ago they put out a call for all CMT4A families to join this group and we learned of a research project. About twenty families from around the world are going to participate. They hope to have a treatment within the next two to three years that would halt the progression and possibly even help Alana regain some of her lost function. Alana is super excited about all of this! It’s the miracle that we’ve been praying for. We’re very hopeful.”

“Scientists have developed a new gene-editing technology that could potentially correct up to 89% of genetic defects, including those that cause diseases like sickle cell anemia.” –Jessie Yeung, CNN, 2019. Gene replacement, a variant of gene-editing, looks like a promising treatment for CMT4A.

Alana and her family have become a part of a revolution in modern medicine. Some would call it a miracle. Dr. Mario Saporta, MD, a specialist in neurology and neuromuscular medicine at the University of Miami explains that “gene therapy is very specific to the gene you are targeting. In this case, it’s in the (DNA region) called GDAP1. There are two different diseases caused by the same gene, CMT2K and CMT4A.” Alana’s version, 4A is “very amenable for gene replacement therapy because the gene she inherited isn’t operating. It’s the loss of the gene that is causing the disease. Replacement will resolve the problem.”

October 8, 2012: The Nobel Assembly at Karolinska Institutet: “The Nobel Prize recognizes two scientists who discovered that mature, specialized cells can be reprogrammed to become immature cells capable of developing into all tissues of the body. Their findings have revolutionised (sic) our understanding of how cells and organisms develop.” –www.nobelprize.org

Referencing a 2012 Nobel Prize winning development, Dr. Saporta explains, “We can take blood or a small piece of skin from the patient and by manipulating those cells we can turn back their biological clock and turn them into a stem cell state. (A stem cell is a cell that isn’t programmed—a clean slate so to speak.) We call those IPS (Induced Pluripotent Stem cells). It’s Revolutionary! By looking at what’s wrong with that cell, we can look to see if we can correct it by using a gene replacement therapy, or a compound, or a drug. It’s almost like plug and play. It’s basically just changing out the gene.” He makes it sound so easy!

“It was the best day ever when we learned of that gene therapy research project a couple months ago,” a joyful Robin says. “It’s given us so much hope that there is actually potential for a cure! Alana could potentially live a life with fewer physical challenges. It’s so hopeful.” 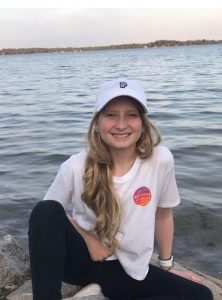 There’s still lots of work to be done before gene replacement is available to Alana. “We do have to go through the process of showing the efficacy and safety, but things become a little easier each time we are successful applying those principles,” says Dr. Saporta. “We’ve seen this being successful with other genetic approaches. This has enabled us to be way more targeted and faster. I think this is the snowball effect. Every successful case moves us faster and forward.”

Of course there’s a “but…” Isn’t there always? “The challenge,” explains Allison (of HNF), “is money. It’ll take $3 million to get us to human trials. There is urgency here. Alana is young and, depending on when we can raise the money, this disease might be halted in Alana and there’s even a possibility that some functionality could be restored.”

This is where you can help make magic or, if you prefer, miracles: Donate to GDAP1

“The more money we raise, the faster we can get to the clinic,” Allison says excitedly. “Money earmarked for CMT4 can only be used for this mutation. Traditionally, we fundraise through direct gifts and families sponsoring events. COVID slowed us down like everybody else.”

“It’s just kind of amazing that we’re at a point where we could halt the progression,” says an encouraged Luke. “If we could just keep her the way she is right now and maybe, hopefully, potentially getting her little better, it’s like man, it doesn’t get any better than that!”

“Honestly, if I didn’t have this, I’d be a huge runner or long walker,” says Alana. She might even dance again.

Never doubt that a small group of thoughtful committed citizens can change the world. Indeed, it is the only thing that ever has. — Margaret Meade

Q&A - More About the Kohler's!

Q&A with the Kohler’s

Q: CAN YOU TELL US A LITTLE ABOUT YOURSELVES?

We live in Lino Lakes, Minnesota. Our family includes Luke, Robin, Landon (13), Alana (11) and our dogs Mylie and Citori. Luke is a project manager and Robin is a radiologic technologist.

Q: WHO IN YOUR FAMILY HAS GDAP1 (CMT4)? WHEN WERE THEY FIRST DIAGNOSED? WHAT SYMPTOMS DID YOU FIRST NOTICE?

Alana has GDAP1 (CMT4). We started noticing symptoms around age 3 with frequent trips and falls. It was also apparent that keeping up with her peers was challenging. She’s been sporting AFOs since the young age of 3.

Q: HOW LONG DID IT TAKE TO BE DIAGNOSED?

Alana started showing symptoms at age 3. We were given a diagnosis of CMT when she was 5, and then we received a genetic diagnosis of GDAP1 (CMT4) shortly after her 9th birthday.

Q: WHO DIAGNOSED HER? (TYPE OF DOCTOR)

Q: HAD YOU EVER HEARD OF CMT BEFORE THIS?

Q: WHAT DID YOUR DOCTOR TELL YOU TO EXPECT? WHAT ADVICE/ RESOURCES DID THEY PROVIDE?

The doctor informed us that GDAP1 (CMT4) is a genetic degenerative disease and it’s considered moderate to severe on the spectrum. We were given a few websites to check out and referred to the MDA.

Q: HOW DID YOU FIRST LEARN OF HNF?

Once we learned that Alana had GDAP1 (CMT4), we searched the internet and joined every Facebook support group we could find relating to CMT. We learned of HNF and their commitment to support a cure for CMT. In September we learned of the GDAP1 (CMT4) gene therapy project through the online newsletter.

Q: WHAT ARE SOME OF THE BIGGEST STRUGGLES FOR YOUR DAUGHTER?

Some of Alana’s biggest struggles include coping with her physical limitations and the judgement of others. Shoe shopping is difficult too.  The choices are limited when you wear braces.

Q: HOW DOES CMT AFFECT YOUR FAMILY?

CMT affects us daily, as we always try to plan our family activities with Alana’s abilities in mind. We have constant battles with AFOs, walking, falling, muscle fatigue, and emotional stress due to CMT and middle school. Multiple surgeries, numerous doctor appointments and weekly PT appointments have made us a stronger and closer family.

Q: WHAT ARE YOUR HOPES FOR THE FUTURE?

Our hopes and prayers for the future include: • Alana to walk without braces • No progression of her symptoms • A cure for all types of CMT and especially GDAP1