My name is Zach, I’m 23 years old and I have CMT Type 6 and Mitochondrial disease C12orf65, both of these diseases have no treatments or cures.

I need your help to fund research and find treatments to this incurable disease.

HNF’s Patient-Driven Therapeutic Research In Accelerated Discovery (TRIAD) Network has implemented a collaborative strategy to accelerate the research for C12orf65, also known as CMT6 with Leigh’s Syndrome. Our research team spans the globe. We have found world class clinicians, scientists, and industry to work together with one common goal to support each other’s work and to accelerate multiple therapy approaches to cure  C12orf65.

Zachary is an amazing young man who enjoys family and friends. He enjoys being involved with school and participates in his community. Zach was recently diagnosed with the rare disease CMT 6. This diagnosis came after countless visits to ophthalmologists, neurologists and orthopedic specialists. Zach is legally blind with a vision of 20/400 and he suffers from Optic Nerve Hypoplasia. Zach’s family has spent most of his life traveling from specialist to specialist, and not one even considered CMT as a diagnosis. It was not until January 2014 that Zach’s doctor suggested this disease was a possibility. Zach’s family had never heard of CMT, and once they researched it and found out what it was, they were devastated.

Further doctor visits to a geneticist were suggested, and it was recommended that genetic testing be performed. Exon genome sequencing is a diagnostic test that has recently become available and helps identify the basis of rare and unusual genetic disorders. Genetic testing provided the answers to a lifetime of questions previously unanswered and undiagnosed. Despite the fact that this disease was discovered over 100 years ago, there are still no treatment or cure for Charcot Marie Tooth disease.

What’s so amazing is that this disease has discovered over 100 years ago and there is still no cure. Please consider donating to Zach’s Team and help us fund research.

What is Charcot-Marie-Tooth Disease Type 6 (CMT6)?

Charcot Marie Tooth (CMT) disease is a family of inherited disorders of the peripheral nerves. Peripheral nerves run from the spinal column out into the extremities of the body, controlling motor function, sensation, and bodily functions. There are over 90 identified genes, in which particular mutations (changes) can cause CMT.

Most people with CMT develop muscle atrophy and weakness in the arms and legs, foot drop, difficulties using the upper limbs, loss of sensation, and varying degrees of walking and balance difficulties, including the necessity of mobility aids such as leg braces, wheelchairs or scooters. There are different categories of CMT, depending on what symptoms the disease presents with, the pattern of abnormalities on nerve conduction studies, the manner in which the CMT is inherited and the specific genetic cause of the CMT.

The most common categories are CMT Type I (“demyelinating”) and CMT Type 2 (“axonal”). CMT Type 6 is a less common form of CMT. In CMT Type 6 symptoms can start either in early childhood, teenage years or adulthood. CMT Type 6 involves development of optic atrophy with loss of vision or blindness, muscle atrophy and weakness, loss of sensation, and balance and gait difficulties. Depending on the genetic cause of the CMT Type 6, there may be other symptoms including delayed learning.

Check out our Videos

We have set ambitious goals to achieve our mission and find a cure for CMT Type 6: Our objectives for 2017-2022

HNF was selected to develop natural history studies, supported in part by a cooperative agreement with the U.S. Food and Drug Administration (FDA) for CMT Type 6.

Update from the Houliares Family

The Houliares Family hopes that this letter finds everyone well. We want to share with you an update on all the progress that has been made over that past year as we continue to raise awareness and money for research for Zach’s disease, Charcot-Marie-Tooth (CMT6). Since Zach’s diagnosis in January 2014, our lives have been forever changed. Each and every day is a constant reminder to us on how important it is to continue our fight for treatments and a cure for this horrible disease, which Zach and others like him suffer from. We have been able to identify other families in the United States that have the same mutation as Zach, so our mission goes beyond the walls of our home as we enter into helping others who suffer like Zach. With Zach’s diagnosis in 2014, we have accomplished the following to date:

Our family appreciates all your support thus far, but now the real work begins – the actual research! With your generous support we have accomplished so much in such a short amount of time. As parents, we believe in the power of love and pull from our strong faith knowing that we have the ability to make a better life for those that suffer from this progressive, crippling disease. Your continuous donation to Zach’s Team will help us in finding treatments and a cure for CMT6.

Congratulations in May on Zach’s Nazareth college graduation from Life Prep.

Happy guy and looking good this past week camping. 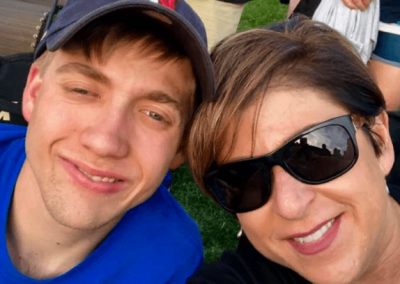 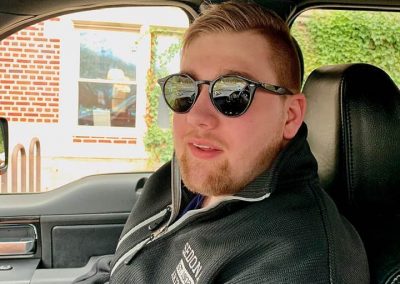 What does this mean? C12orf65 can present as two different types of diseases called CMT6 and Leigh’s Syndrome. Both diseases are caused by dysfunction of mitochondria, the energy factory of our cells, and are progressive and, many times, devastating.

CMT6 is a complex type of CMT because it is associated with many other features in addition to the typical CMT symptoms such as delayed learning, blindness, language impairment and shorter life expectancy. Some patients with mutations in the C12orf65 associated with severe mitochondrial dysfunction can also present an aggressive central nervous system disease called Leigh’s syndrome. Symptoms are frequently triggered by a viral infection and include developmental delay or regression, loss of coordination, vision and hearing loss, memory disturbance and low or weak muscle tone.

HNF has been working hard to raise funds for Zachary Houliares, a young man, age 21 and others like him to find a treatment. Despite Zachary challenges and being legally blind, he has excelled in his community as a sport star coaching for his high school team and is continuing his passion at the college level. This past winter, Zach caught the flu and experienced a severe decline of his CMT which led to the diagnosis of Leigh’s Syndrome. It’s only now that we have learned, that CMT6 and Leigh’s Syndrome share the same gene, but Leigh’s syndrome presents more severely.

HNF, in collaboration with Robert Burgess, PhD at Jackson Labs, Steven Gray, PhD at UT Southwestern and Mario Saporta, MD, PhD, MBA at the University of Miami, are working diligently on developing a therapy for these diseases.

We want to thank Flour City Station and all those who came to join us for “Brews for a Cause”  on Sat. Feb 2nd in Rochester, NY

We are truly grateful for the continued support for Zach and the Hereditary Neuropathy Foundation’s mission to find a cure.

We want to thank Locals Only, Lake Beverage, IHeart Radio and the RocCity Steel Sisters for their donations and support that helped to make our guest bartender event a success.

Many thanks to everyone that came out to support Zach and the Hereditary Neuropathy Foundation find a cure.

More About The PFDD Meeting

In attendance were patients, caregivers, Government Officials, Healthcare Providers, Industry Representatives, and Payors. The PFDD meeting was an opportunity for patients and families to inform the FDA, drug developers and other key stakeholders, on the true burdens of living with CMT and how patients view the benefits and risks of treatments for CMT. This groundbreaking meeting included facilitated panel discussions designed to provide the FDA with perspectives from people with hereditary neuropathies, advocates and caregivers. The day focused primarily on a range of patient viewpoints on CMT, covering the symptoms and impacts to daily life that are most important to patients and patients’ perspectives on existing and future treatments.

“Not your average Joe” bartender and the Roc City Sisters raised over $1300 in tips and raffles as Team Zach continues to raise awareness and money for research for CMT6.

Thanks to all who supported me for the 2018 TD Bank Five Boro Bike Tour. It was a great success!

Debi represented HNF and more than 450 other advocates in Washington DC for Rare Disease Week. Her meetings on Capitol Hill lobbying for “The Orphan Product Extensions, Accelerating Cures and Treatments”, “Advancing Access to Precision Medicine Act” as well as asking our representatives to join the “Rare Disease Congressional Caucus” at both the US Senate and House of Representatives.

Thank you to all that came out to support Team Zach at the Scotland Yard Pub!

A good time was had by all as our awesome “Joe” bartenders raised over $1000 for CMT Type 6 research!

Check out the action-packed and heartwarming story by the New York Times bestselling author and former NFL defensive end HERE.

The Rochester Chrome Divas hosted a Scavenger in the Finger Lakes of NY on September 9th. Mother nature provided us a sunny cool fall day for the ride.

98 Participants enjoyed spending the day with Zach and the Divas. Grown “bikers” played duck duck goose, hugged a stranger, folded laundry for a stranger all while spreading the word for CMT6. Divas came in from Xenia OH, Watertown, NY and Cortland, NY to help support such a worthy cause. Other clubs joined the day not only to show the Divas support, but to learn about“Our Man” Zach.

Each person had a chance to meet Zach, have their picture taken with him and see where he worked this summer. We sold CMT6 Awareness patches, which are still available; click here.  Wearing these patches will create new conversations and awareness going forward. The day was a great SUCCESS!  Everyone returned safely and LAUGHING because they had sooo much fun. Many asked to be alerted about the next event.

HNF is happy to report that The Rochester Chrome Divas raised over $12,000 for CMT Type 6 research!

Learn more about the event and the Rochester Chrome Divas HERE.

Thank you Senator Funke for recognizing Zach by honoring him with a Proclamation for being an exceptional advocate for CMT.

Zach and one of the football coaches sporting their “Find A Cure” bracket as they stand centerline at New Era Stadium home of the Buffalo Bills.

Thank you Senator Rich Funke for spending time with the Houliares Family and hearing Zach’s story. Raising awareness for CMT.

Thank you to everyone who came out to support Zach with raising awareness and money for research at the Casino Night at the Strathallan Hotel.

Zach and players from the Victor, NY Football Team

Help support our mission to find a cure for CMT Type 6.