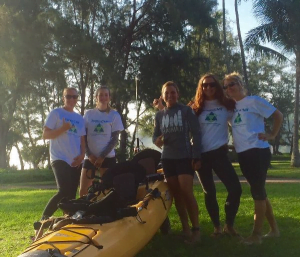 Day 6: After her long paddle to Laupahoehoe, we kept telling Jenny to just focus on the easy 10ish mile day she had coming up. At one point she said, “With how things have been going, let’s not call them easy days. We will just say it’s a short mileage day.” Unfortunately, she was right to not be so optimistic.

The launch was tough! The waves were huge coming into the previously calm boat ramp. We tied off the kayak and timed it so we could pull it out and around to the side where she could get better situated. After some adjustments, she was off! We watched her paddle around the point then headed back to pack up camp and start scoping her next landing spot. She was scheduled to land at Hakalau. Hakalau was a beautiful campsite, but the swell was huge and breaking right offshore. There was no safe way she could have made it in, even if she anchored and swam to shore. Knowing this was a possibility, she had previously scouted a backup spot, Kolekole beach park. Unfortunately, when we arrived there we drew the same conclusion ­ not safe. Meanwhile on the kayak, Jenny was in 12 foot swells. She said as soon as she rounded the corner she knew she was in for a tough day. About an hour into her day, it was so rough that she leashed herself to the kayak, put her life jacket on, strapped her water bottle on, and attached her radio to her vest in preparation for the worst. On a positive note, she said adrenalin turns out to be a great painkiller so her wrist and other sore spots weren’t bothering her too much. We were able to sight her and get radio contact outside of Kolekole. Jenny stated she was unsure what we were seeing from shore but she knew from the water that both of her landing spots were a no go. She was scared and wanted to get off the water but anywhere around these planned landing spots was out of the question. She decided to just keep paddling in hopes of finding a safe landing. The land crew pored over maps and toured back roads in search of a solution to no avail. Finally, it became clear that her ‘easy’ low mileage day was about to get 12 miles longer. She needed to get to Hilo. Hilo Bay has a break wall that would allow her a safe landing no matter what the conditions. Krystal hesitantly called Jenny on the radio to tell her our conclusions. After some encouraging words she agreed on the push through to Hilo. Since this landing spot was completely unplanned the ground crew was hustling to the area to decide where we would stay for the night and what to do with the kayak. Elizabeth Baker made a phone call to an old paddling coach Uncle Ira from Hui Wa’a O Waiakea canoe club. He showed us nothing but aloha and was generous enough to let us use their halau (a shed where the outrigger canoes are stored) to camp in for the night. She had a smooth landing at 5:30 PM, almost a full day ahead of schedule!

Jenny said that today she learned that no matter how much you prepare, sometimes the ocean has other plans from you. All in all, it was a successful day. The obstacles she faced ended up being positives in the long run. She is tired and sore with lots of chaffing, but the extra miles she paddled yesterday should allow her to have a short mile day tomorrow. She may even get her wrist some much needed medical attention.