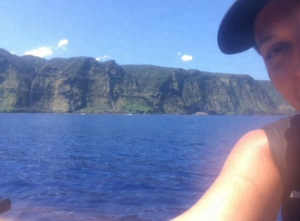 The north east valley’s of the island. Waterfall after waterfall….”by far my most beautiful paddle day”­ taken from my GoPro

Day 4: Jenny reported a beautiful paddle along the valleys! She said the views were absolutely breathtaking with waterfalls in almost every crevice and a mom and baby humpback whale to keep her company for part of the day. She arrived to Waipio Valley at around 3:30pm and had her first experience anchoring the kayak and swimming in. The anchoring went great, though it took a while to find a good spot outside of the break, and she said the swim in was fine. One of her forearms is swollen and sore. We are concerned that she might have a small fracture so we have been icing and wrapping it. Tomorrow we will be able to deliver a brace and more ice packs. She had to turn her LED light on when she left the kayak so it died at 3am. She had planned on a 4:45 AM departure but she couldn’t see the kayak so she had to wait until she could catch a glimpse of it. The swim back out was about 1/4 mile in the dark, but she arrived safely at her kayak and took off at 6:05 AM. She has a super long day ahead of her today. It is 25 miles to her next stop with an injured arm and her early reports this morning were of high winds.