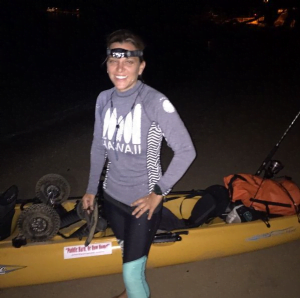 Day 3: Jenny left before sunrise with a 22 miles paddle ahead of her. She had a whale following her in the dark that she could only hear. The whale was spouting water just next to her and she could hear it’s underwater song from the kayak for the first two miles. It was as though the whale was guiding her along the path. She described it as the most beautiful way to start a paddle in the dark. She felt as though she had her own guardian angel. Going through Kawaihae, she knew the risk of high trade winds and the dangers of the Alenuihaha Channel (often referred to as the most dangerous channel crossing in the world per the Coast Guard or the “I’ll­end­you, ha­ha” channel). There was no time to waste with the daunting day ahead of her and she felt more focused and ready than any day thus far. It was a calm start with beautiful coral and coastline, but that didn’t last long. When she hit the channel, she got stuck in a bad head current. She was giving it everything she had, paddling at 100% effort, but was making no forward progress for almost an hour. Big swells were coming straight at her with the wind directly in her face. Eventually, she started zigzagging in close to shore and then to out at sea. It was a slow process but it proved effective. After 1 hour and 45 minutes she was finally able to get through to slightly more manageable waters. While she had been scared on this trip before, this part was the scariest time to date. This left her questioning once again what she had gotten herself into. Was it possible? Jenny stated she had wanted to turn on the Gopro to get some footage of how bad the ocean was, but she was literally too afraid to take her hands off the paddle. Fortunately, the rest of the day went smoothly. She was surrounded by breaching whales and was finally able to fall into a good rhythm. Despite her hardships, she said that this was her favorite day thus far. Although she had questions about the trip, she also had made it through some tough waters, which gave her the confidence to continue forward. Giving up isn’t in her vocabulary and she had finally found her groove! With help from her friends, Jessica and Jim, at the lighthouse old canoe ramp (more like a huge rock entry on the side of a cliff) she had a perfect landing. The longest mileage day yet but earliest landing. She was able to settle in for a beautiful evening of food, talking story, and camping. The crew reported crystal clear skies, epic stars, and even a few shooting stars! Today she is rounding the north end of the island and going along the valleys. Tomorrow she is planning on camping in Waipio which is about 15 miles from the Lighthouse.