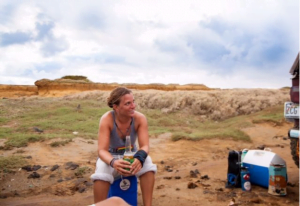 End of day 16 into day 17of living outside and building my friendship with the ocean:)! The wind close to south point was relentless. Staying grounded due to weather on day 16 was the right choice but we fought 15­25 mph winds and dirt all day and night. Even our covered bedding in the tent had a fine layer of dirt and sand on it! At one point Krystal and I couldn’t figure out if we were super tan or super dirty! Most likely the later! 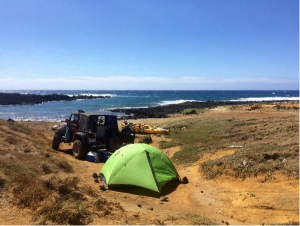 Kelly Goddard and her husband Greg stopped by our wind fort late afternoon with greetings and yummy provisions:)! We enjoyed their company as well as the fresh bag of ice, toilet paper, iced coffee and malasadas they brought us! We discussed Greg possibly being my chase boat around South Point so someone would be there in case the unthinkable happened. After baking in the sun for a bit they headed home and Krystal and I went for a swim! We ended the night with music, some dancing, a wonderful solar shower shampoo, and lentil soup. We shook out our bed as best we could and had little sleep with the pounding of the wind on the tent. We woke up at 5 am to prepare for my biggest challenge of the trip…SOUTH POINT! The wind was still howling and white caps were already forming before the sun was even up. As we prepared the kayak Greg Goddard pulled up with his zodiac!! All of my anxiety went right out the door to see him get out to say good morning!! Greg was taking a big risk as well to round the point with me. He has a very well equipped but only 12ft zodiac. Knowing the swell is predicted to be 10+ he was placing a lot on the line for me! We both put our vessels in the water, said our goodbyes to Krystal, and off we went into the already building swell! As expected the wind was strong and the swells big!! Side by side and mile by mile, we past the lighthouse, then the cliff jump, and we were headed safely north! The day was just beautiful and Greg followed me all the way to my landing spot at Pohue bay! He decided to take out at Milolii. He didn’t dare to go back through what we had experienced this morning. Krystal lead me in by radio and was waiting in the water for me as I rounded the corner to the beach! She helped pull my rudder and prepare for my beach landing! You would think I would have it down by now but landing a 16ft, tandem kayak solo is rough going. It was graceful enough as an amazing group of kids and beach goers helped pull me out of the surf. Met a group of people who had rented the beach for a weekend for a birthday gathering. They were so welcoming and very interested in my journey since some of them were paddlers. After talking story for a bit Krystal and I hiked to the jeep to get everything we would need for another night of camping. We set up shop and I literally passed out face down in the sand for nap. Today’s paddle was only 15 miles and I arrived before noon. 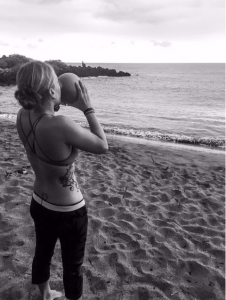 We filled the afternoon drinking fresh coconut water and just enjoying the island we love so much! It feels great to be back on the west side with only 3 paddle days left to Kona. Keep caring and sharing everyone because that is my drive in this journey! Mahalo, Jenny