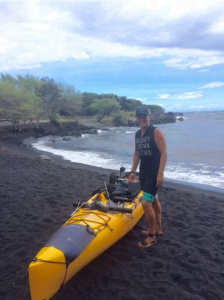 Words could never explain how happy I was to reach shore this day!!­photo taken by Emily Moore

Day 13: Aloha everyone it’s Jenny!! I woke up in Keauhou at 4:30 am and listened to the weather radio.. My stomach turned a little when the report announced that they were calling for a small craft advisory around most of the island with wind gusts up to 40mph. My journey was through the southeast side of the island which was predicting Northeast winds up to 25 mph. With little provisions left at Keauhou beach in Volcano National Park I needed to get to my next stop. After laying in the tent for a little longer I jumped up and decided I would go! Krystal and I guided the kayak out of the waterways of our beach and off I went around the natural, lava break wall. The wind was in my favor but the swell was all over the place. Pushing me from all sides and crashing over the kayak! As the miles went by it only got worse. Trying to remain calm I put my life jacket on, attached my radio, and leashed myself to the kayak! The swells started breaking offshore and I was literally surfing waves. I was almost certain I was going to flip it as the waves started nose diving the front of my kayak underwater as they picked me up. At one point a wave turned my kayak completely around causing another wave to flood over the side of it. I gave myself a pep talk over and over again trying to convince myself that I was ok. As the day went on the wind continued to pick up increasing the swell and decreasing my control over the kayak. My experience with the small craft advisory (12 ft swells on the north east side of the island) earlier in my journey I felt a little more comfortable with these kind of conditions. However, this day seemed way worse. Minutes seemed like days and I was becoming terrified. My encouraging pep talks weren’t working anymore and the need to get off the water became urgent! Most of my land crew was still hiking out of Keauhou so Emily, alone, was scheduled to be my landing support. I felt completely safe with her in charge of this so I called her to try and figure out my options. She said she could hear the fear and urgency in my voice so she started speeding to get to me. I was only a few miles from the Black Sands Beach so she was heading there to find out the conditions. She even called and got advice from lifeguard friends and Bill. Everyone agreed that I should get off the water and with a boat ramp at the beach park there had to be a channel to safely get in. Emily kept talking to me on the phone and she discussed the situation with the lifeguards. The three lifeguards (Kevin, John, & Kaleo) and Emily were trying desperately to locate me but I was hard to spot disappearing in the swell. Finally, Kaleo braved the waves and swam out on his board to find me. After a few minutes of searching we found each other! What a relief to have another person just in sight. He called me a “beast” for being out in the conditions and then gave me a briefing on how we would make it in safely! After some careful maneuvering we made it into the shore! Emily was anxiously waiting at the beach for me and we hugged for a long time! I was still shaking with fear. The relief I had at that moment could never be put into words. With Emily’s quick thinking and the help of the lifeguards I was safe and sound! She let the other land crew know I was in safely. Still in disbelief of the last few hours Emily helped me get the kayak to a camp spot, change into dry clothes, and unpack things. Krystal, Lu, and Elizabeth showed up shortly after and we all embraced each other! You could feel the relief that we were all together again. They brought me a burger and fries which was the most amazing thing EVER! We spent the evening laying around and chatting. Emily and I went over to thank the lifeguards one more time for their service! After some small talk they recommended to wait until Friday to head towards my next landing due to the conditions being worse than today. After listening to the weather radio predicting heavier winds and swells I am taking their advice! Completed 18 miles today in 6 hours. Was only 2 miles short from my planned landing. The next few days will be my most dangerous but if I plan it out right I know I can do it! Keep caring and sharing!! Mahalo, Jenny