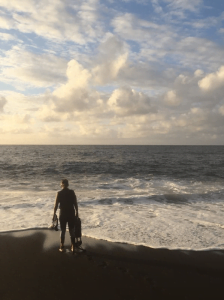 Jenny(Kehena beach)getting ready to swim to the kayak at dawn. So far from shore you can barely spot it in this picture­ taken by
Krystal Sentz

Day 10: We were thinking this was going to be a super boring update… no such luck. We began at the champagne ponds in Kapoho after an enjoyable day’s rest. There were six different breaks just to get out of the bay so Mike hopped in the kayak and helped get it back to the edge of the bay. He swam back to shore and she was off! The 11 mile paddle started out a little rough. Jenny stated it was like being in a washing machine out there but it calmed down quickly. With the wind and swell in her favor she made it to her next stop in an easy 5 hours. She said she even invented a new method of paddling called nappling; where she foot peddled and tried to power nap. Her next stop was Kehena beach in Kalapana where she planned to anchor and swim to shore. Setting the anchor is a bit of a tedious process, she needs to account for the tide, wind, swell and break, as well as finding a place where the anchor will set. After picking a spot and dropping anchor she then stays on the boat until she feels confident that the anchor is properly set. We made sure to let her know over the radio that she would be swimming into a nude beach so she should probably take her top off. After a fairly long swim in she was welcomed onshore by the “mayor” of the beach who wished her luck and aloha on her journey.

We climbed back up to the road and found a good camp spot where we could keep an eye on the kayak. With that matter settled we headed off to see our good friends Tony and Callie for warm showers, electronic charging, lunch and amazing fresh honey samples from their 7 beehives. After a wonderful afternoon with great hospitality, we headed back to camp to settle in and make dinner. All of a sudden we heard a cry of alarm from Jenny, “someone is in my kayak! They’re paddling it!” After a second of stunned shock we jumped in the vehicle and raced back down to the beach. As we came down the side of the cliff they had brought the kayak into right before the break, the rudder was up and they were preparing to bring it in. Jenny started yelling at them to stop and leave it there, she dropped her stuff and swam out in her pajamas while we watched from the beach. After a heated exchange (Lauren could hear her yelling at him to get out of her kayak all the way from our campsite) the guy finally jumped out. Jenny demanded he unlatch and put the rudder back down for her. We watched helplessly as she paddled it back out and tried to set the anchor. It was dusk, we were losing light quickly, and she was still pretty far from shore with no goggles, fins, or light for that matter. We had a headlamp for her to follow into shore but we rushed out of camp so quickly we weren’t well prepared. Fortunately, Jenny is a strong swimmer so after a ten minute night swim and fight through the strong shore break, she made it. She told us later the thought of a shark attack was going through her mind the entire swim in. It was so dark we never saw her leave the kayak, never saw her swimming, and only caught a glimpse of her when she made it to the break. She knew no one could see her in the water and the thought of never arriving ashore was a definite possibility. Jenny recovered on the shore for a few minutes and we gathered our things. We are still unclear of their intentions with the kayak, they all had different stories and seemed to be in a bit of a hurry to leave the beach. So much for her hot shower and clean clothes! We headed back to camp with an uneasiness about whether or not the anchor would hold but knowing at this point it was out of our control. We had a hot spaghetti dinner waiting for us at camp (thank you Lauren!) so we had a quick meal and went to sleep. We were up at first light getting ready to leave and finally had good enough visibility to spot the kayak, what a relief!!!! Day 11 is scheduled to be a long paddle along Kalapana out to Keauhou Bay in Volcano National Park. Jenny is not as well rested as we had hoped after last night’s dramatic events, there is potential for rough conditions and the shore crew will also have a long hike in.