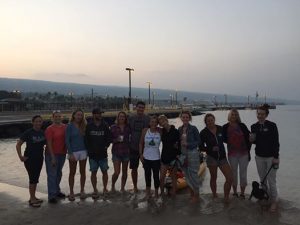 6:30am take off from the Kona Pier with all of my amazing Ohana on Island­ taken by a friendly, stranger on the beach 🙂

Day 1: After much preparation and a tiny bit of sleep Jenny started her kayaking journey early Friday morning on March 25th, 2016.

[An important note ­ distances used are calculated based on a straight line. With currents and ocean conditions taken into consideration, Jenny’s actual distance paddled will, without a doubt, be much further]

The morning started with a sleepy send off at the pier from Jenny’s friends and shore support! Jenny realized immediately that the kayak was overloaded. She could either stop in the harbor 3 miles into her journey, or try and fix the problem to avoid the pull in. After dumping her emergency stash of water, it was obvious the stop was necessary. She pulled into the harbor escorted by a beautiful pod of dolphins to unload unnecessary gear and was on her way again. She struggled getting in the groove of paddling that morning, even with all of her training. She was not sure if it was nerves or something else. It was a bit of a rough start but obstacles were overcome and a lot was learned! After a long 14 miles of head current and winds she pulled into a beach just north of Makalawena (apparently known as “cockroach beach”) where she spent the first night. From the moment she pulled into shore, it poured down rain. Unable to use her stove or find warmth, Krystal and Jenny rinsed off in the rain and climbed into the tent. They ate some nuts and salami while working on a crossword puzzle before calling it a day. The scheduled 5 hour paddle day had turned into 9 ½ hours and thoughts of if she could really do this began to arise. Jenny’s last statement to Krystal that night was that she was truly scared. Most of all she was scared of failing.